I visited my parents and sister for Memorial Day and we made the most delicious ice cream.  It was super easy and so I just HAD to share it here.

Cut the strawberries into small piece and place in a bowl.  Add the sugar and put in the refrigerator for at least four hours.  We used strawberries we purchased that day.  Next time I will either use strawberries that had been purchased a few days earlier or previously frozen strawberries.  The idea is to get them really soft.  This is so you can easily mash them into an almost-puree.

Take the berry mixture out of the refrigerator and mash the berries to your preference.  As I said above, I really like the berries extra smashy--I don't like having hard frozen berries in my ice cream.

Add the remaining ingredients and stir well.  You can either place the mixture in your ice cream freezer at this point or put the mixture in the refrigerator until you are ready to freeze.  Freeze according to your manufacturer's directions.

This could be the most boring blog out there.

Easter dinner this year will be ham (a faux Honey-baked variety), twice baked potatoes, green beans (maybe broccoli), rolls, and pretzel salad (I just can't say no).  I'm trying to decide between carrot cake and chocolate cupcakes.  Since Darrell won't eat either, it really is a question of which I want to eat.  And give away.

Since I just posted on my other blog, I figured I would post on this one too.

Keep your fingers crossed!
Posted by Stephanie :) at 11:15 PM No comments:

It's been a long time since I posted on this blog!

Here is the plan for Thanksgiving Dinner:

We brine it, which makes it soooo juicy! I think we will smoke it on Darrell's smoker. It really is tasty this way.

I use Yukon Gold potatoes, lots of butter, sour cream, salt, and pepper. I make mounds of them.

I use only cornbread--no white bread. And I try to get it baked as dry as I can--lots of edges and corners. I guess it can't really be called stuffing, since it isn't stuffed into the turkey. I add just a little bit of onion, celery, spices and chicken stock. I like it to be cooked almost dry. No mackiness!

I haven't really gotten this right in the past. I like to have still firm yams with a little butter and brown sugar carmelized on them. I usually end up with yams a little too mushy for my liking.

I blanch or steam the green beans and then saute them with olive oil, shallots and sesame seeds. They get a little burnt and taste almost sweet. 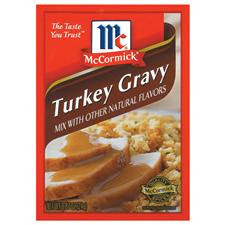 Ok. I cheat! I can't make gravy to save my life. I use the gravy that comes in the packets that say, "Just add water." It's my only cheat and it's worth it.

Mmmm! Hot, out of the oven, with melty butter. Oh, if only I could have one now.

My mom always makes seven-layer jello salad, but I don't have the skills to do that. So I make the Raspberry Pretzel Salad. My brother-in-law Nathan says this isn't a salad. I don't get it, though. There is raspberries, jello, cream cheese, whipped cream, all on a pretzel crust. He also says that Cookie Salad isn't a salad. Whatever. (I'll have to post the recipe for Cookie Salad one day.)

I never liked this as a kid. Then I liked it when I grew up. I always used the canned cranberry sauce, thinking making it from scratch would be hard. Last year I made it for the first time. E.Z. And it tasted so much better.

Duh! It isn't Thanksgiving without Pumpkin Pie. I always make the recipe on the back of the Libby can. It's the best one out there! I will probably use the canned pumpkin even though I still have at least 4 more cups of pumpkin puree. It was runnier than the canned pumpkin and I don't want a Pumpkin Pie disaster.

I will make the recipe I made last year. This year I will follow the recipe, though. I didn't add enough sugar to last year's and it needed it. The crust was divine! It took almost a week to finish the pie and the crust never got the least bit soggy.

I whip my own. Maybe I'll whip two batches and put either cinnamon or caramel in the batch for the apple pie. That sounds really evil! (I'll tell you what else is evil...that you really can't google image whipped cream without seeing things your eyes weren't meant to see. This is the reason there is no photo.)

I love to drink cranberry juice for Thanksgiving. With a little Sprite for added zing.

I think I will get one on Friday after Thanksgiving. After I go to the gym to work off some of the calories above. (And the majority of photos on google images for "nap" are kittens sleeping. I am not a kitten and don't find kittens sleeping as cute as some people.)
Posted by Stephanie :) at 10:04 PM No comments:

The month of October had one of my FAV.O.RITE. ingredients!

I was SOOO excited--thanks Julie!

I made four, count them, four recipes.

The first was pumpkin puree. It was a ton of work, but it was fun. I don't know if I will do it again, unless I get a spankin' deal on sugar pie pumpkins.

The second was pumpkin seeds. I was a little disappointed with them. I think it was because the seeds are so much smaller in the pie pumpkins than in the gigantic carving pumpkins. They were a good treat, though.

The third was pumpkin ice cream. The recipe is basically a custard with pumpkin puree (see above) added. My ice cream maker wasn't working properly, so it only froze part way. I took it to Lucinda's and we ate some. It is very rich, so we couldn't eat much. Did I mention it was rich?

The fourth was pumpkin bread. Since I've made the recipe a million times, I added a streusel topping, making it even more dessert-ish. I was delish and I finished the last of it this morning for breakfast. (And, yes, I think all breakfasts should include dessert.)

I really enjoyed my yummy pumpkin recipes. I still have 4 more cups of frozen puree. I will have to think of more delicious foods to make.
Posted by Stephanie :) at 6:32 PM No comments:

Better late than late for dinner!

This month, or rather, LAST month, the family cooking club had the challenge of making a different recipe of burgers. Any kind of burger. Turkey, veggie, ham (as in hamburger). Whatever.

I decided right away that I wanted to do a stuffed burger.

And I waited. Until today.

Here is my result: 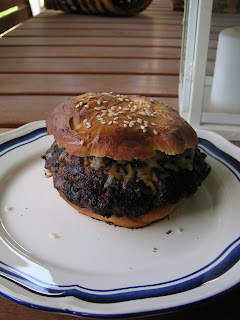 And this is what Darrell's looked like when it was cut in half: 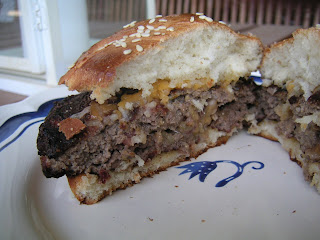 Doesn't the bun look delish? Yeah. I made 'em. The recipe will follow the burger recipe.

I used 80% lean hamburger (they really should call it 20% FAT), since it really makes the juiciest burgers. I had about 1.75 pounds. I added an egg, some Worcestershire sauce, garlic powder, onion powder, salt and pepper. I formed 8 really big and skinny patties. For Darrell's, I used grated cheese and bacon bits, sprinkled some in the middle and slapped two patties together, sealing well. For mind, I added some cream cheese. I made 2 burgers for each of us, but froze one set for later.

Darrell grilled over mesquite lump charcoal until done. (No pressing down on the patties while cooking, or a mess will ensue).

Here's the recipe for the buns:

In a microwave safe small bowl, combine 1 cup milk, sugar and butter. Heat until butter just melts and mixture is warm but not hot. If it is hot, wait until it is lukewarm to proceed. In a large bowl, combine salt, egg white, yeast, and flour-one cup at a time, to form a soft dough. (In a separate small bowl, combine remaining egg yolk and tablespoon of milk). Knead dough briefly, about three minutes. Butter same bowl, replace dough, cover and let rise for about 1 hour, or until doubled. (At this point, you could punch the dough down and refrigerate it for up to 24 hours, or until ready to proceed.) Shape dough into 10 separate round buns. You can roll them out and cut them with a biscuit cutter, or you can simply shape them into 10 round buns. Let rise on a greased baking sheet for about 45 minutes, or until light and risen. Preheat oven to 450 degrees. Brush buns with egg yolk mixture. Bake for about 15-18 minutes, or until nicely browned.


They tasted yummy and I look forward to eating these again!
Posted by Stephanie :) at 6:45 PM 2 comments: